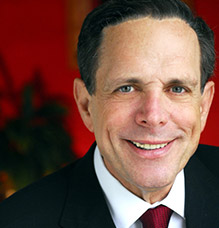 A native of Southern California, Cantor Joseph Gole attended the University of Judaism, Hebrew Union College, and earned his degree in opera and voice at the University of Southern California. A product of the Conservative Movement, Cantor Gole grew up in Los Angeles and attended Adat Ari El, Los Angeles Hebrew High and Camp Ramah. He studied privately with Hazzan Allan Michelson, Hazzan Samuel Kelemer, and Jewish repertoire coach Erwin Jospe. He has been the Cantor of Sinai Temple for eighteen years. He is a past International President of the Cantors Assembly – the largest professional organization of Cantors in the world with 550 members. A recipient of the regional United Synagogue Award for outstanding creative programming, Cantor Gole has served as faculty at the University of Judaism and the Baal Tephilah Institute, and has encouraged numerous young hazzanim who now occupy leading cantorial positions. He personally trains our B’nai Mitzvah students and participates in the life cycle events of our congregants. A brilliant concert musician as well, he has appeared with many major ensembles, including the Pacific Palisades Orchestra, the Guild Opera Company of Los Angeles, and the Los Angeles Philharmonic.